At Dad's Tie, we feel a special connection to the Sears and Roebuck Company and in particular with the Sears catalog. In fact, it is the Sears catalog that inspired the earliest concepts and ideas for Dad's Tie. But before we get down to the feeling behind Dad's Tie, let's take a look at the history of Sears, Roebuck, and Co., an iconic American company.

The Sears Watch Company was founded in 1886 as the result of an unlikely series of events. Richard W. Sears was employed as a station agent by the Minneapolis and St. Louis railway station in North Redwood, Minnesota. During his downtime between trains, Sears sold building materials and coal purchased from the railroad to town residents. This was a great way to earn a little extra money but it was also the beginning of a long and lucrative career in sales and marketing. In 1886, a large jewelry and watch company sent a shipment of watches to a jeweler in North Redwood, MN. The town jeweler, however, refused the shipment and instructed Sears to have the watches sent back. Instead, Sears decides to purchase the watch shipment himself. Over the next few weeks, he sold the gold watches up and down the railroad line and reinvested his earnings to purchase more inventory.

The following year, Richard Sears moved his company to Chicago hoping to grow the operation. He hired a watchmaker named Alvah Roebuck and together they continued to grow the Sears Watch Company. During the late 1800s, farmers and others in rural communities purchased nearly everything they needed from rural general stores. Even in those days, it was common to see 100% markups from wholesale to retail which was especially frustrating for farmers because they were receiving wholesale prices for their crop goods but were forced to pay the retail mark up on the crop goods they needed but did not produce.  In fact, farmer protest groups were formed all across rural America. Sears and Roebuck spotted the opportunity and took advantage of the largely unregulated railroad and postal supply chain. They were able to purchase items like flour in bulk and distribute to rural areas by mail order. This process removed the retail middle-man enabling farmers and rural townspeople to purchase and receive the goods they needed at a much lower cost. As a result, the watch business was reformed as a mail order distribution firm under the name Sears, Roebuck, and Co.

By the mid-1890s, Sears and Roebuck was publishing a 500-page catalog featuring everything from women's shoes to fishing tackle. By the end of the 1890s, Sears annual sales were closing in on one million dollars. During the early 1900s, Sears made significant cost saving improvements to their distribution system. With these improvements and the accompanying cost savings, they were able to open a distribution center in Dallas, Texas. The Dallas distribution center was a critical piece of company infrastructure that allowed Sears to effectively move into the Southeastern United States.  In 1905, Sears developed and tested his revamped catalog, now called the Sears Wishbook and promoted it with a piolet program in the state of Iowa. The response was good, improvements were made and the Sears Wishbook was born.

Although Sears has been on the decline for many years and has recently filed for bankruptcy protection, between 1920 and 1980, Sears was a cornerstone American retail establishment with thousands of retail stores and a home office in the 110 story Sears Tower in downtown Chicago.

If you happened to grow up in America during the time before cable TV and internet, you will likely remember the Sears Wishbook that arrived in every mailbox across the States at the beginning of October. This catalog was the great harbinger of the approaching Holiday season. The Wishbook was the only tool children in the city and country alike used to create their Christmas lists and their letters to Santa Clause. The Sears Wishbook can only be compared to the Amazon of today except it was packed full of beautiful imagery and copy that made you feel a part of something bigger and better. It was our connection to the stunning array of toys produced in far away and magical toy factories that made the Wishbook so fantastic.

My mom raised four kids, two boys, and two girls. Each year as Christmas approached, we were given our own special magic marker with a color of our own. It was our task to go through the Sears Wishbook and put circles around 10 of our favorite items featured in the catalog. Lists were then organized for each of us and mailed to grandparents, aunts, and uncles. And, yes, these items selected from the Sears Wishbook also magically made their way to Santa himself, many finding their way under our tree each Christmas Eve. It is this Wishbook that inspired the Dad's Tie concept. However, Dad's Tie allows you to use the entire internet as a wishbook to create you personalized wishlist. You can organize your lists and customize them with specific details. From Dad's Tie, you can select anyone you know to have access to your list. They can purchase items from your list with one click. Your shipping information automatically carries over from Dad's Tie and fills in for people purchasing items from your list. We have automated the Sears Wishbook! And, we think it's a lot more fun than drawing colored circles around photos of toys you love. 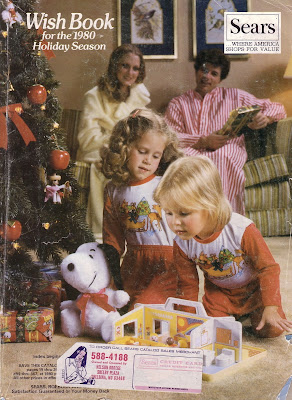 If you haven't already set up your list, do it today. Invite your friends and family, they will love Dad's Tie as a wishbook and as a unique shopping tool designed to save money and time. Once you are using Dad's Tie, please let us know what you like and what causes you trouble so we can improve the experience for all users. Thanks in advance and thank you to Richard Sears for inventing the wishbook and inspiring Dad's Tie!